Back to the overview
Stories / Central location

The waterfront location makes the Elbtower a very special building. The Norderelbe at the foot of the 245-meter-high tower is one of the most important waterways in Europe.

The people of Hamburg know that if you have the River Elbe right at your doorstep, the world is open to you. And vice versa – the world also comes to Hamburg via the River Elbe because it is navigable. From its source in the Krkonoše Mountains in the Czech Republic to its mouth in the North Sea, this waterway is an important transport route. It can be navigated over a length of almost one thousand kilometers – through mountains and flat land, through densely populated urban landscapes and untouched wilderness. With canals and other rivers and lakes, the Elbe is a hub in a densely woven transport network in the lands beyond.

Almost 11,000 inland waterway vessels docked in Hamburg in 2021 alone. They transported around 7m tons of cargo, making Hamburg the third largest inland port in Germany. The route via the Norderelbe is very important for the economy. Predominantly stones and earths, coal and petroleum products, ores and metal waste are transported there by ship. And because the roads and railroads in Germany are so stretched, even more ships are to operate in the coming years. After all, a modern inland waterway vessel can carry the cargo equivalent of 90 trucks.

In addition, river and canal transport is natural, decelerated, and sustainable – inland vessels are a gentle means of transport. They travel quite slowly and are less exposed to major climatic hazards than ocean-going vessels. Also, transportation costs as well as their energy consumption are relatively low. From the Elbtower’s shore, you can watch the flat-bottomed ships leisurely set off southward into the lands beyond or enter the harbor heavily laden from the south.

Trips as far as Prague and Berlin

When you look at the barges and large tugs on the banks of the River Elbe, you get an inkling of the vastness that lies inland. The ships run from Hamburg to Magdeburg and Dresden, and to Lovosice and Prague in the Czech Republic. Fixed scheduled services start in Hamburg every day, and some canals even provide connections to Berlin, Braunschweig, Hannover, and Minden, as well as to the Ruhr region and the Rhine and Moselle rivers.

Southeast of Hamburg, the River Elbe becomes the Norderelbe and runs past Billwerder Bay to the Elbe bridges. There, where the Oberhafenkanal branches off from the Norderelbe, the Elbtower – the new gateway to Hamburg – will rise in a few years’ time. The route then passes HafenCity, Speicherstadt and the Elbphilarmonie Concert Hall before reaching the harbor with the bridges Überseebrücke and Landungsbrücken. There you can also see the large seagoing vessels, the pleasure boats, the fast ferries and the gigantic docks and quays. The captains on the Norderelebe downriver must even watch out for traffic from above because seaplanes are allowed to land between HafenCity and Landungsbrücken.

The areas around the harbor are changing

But the river is no longer as calm as it was upstream. The water is “a bit choppy”, as the people of Hamburg like to say. Waves, currents, and gusts of wind sometimes make passengers on the Elbe feel like they’re on a roller coaster.

Inland vessels can drop anchor at around 100 moorings in Hamburg. Directly opposite the Elbtower, for example, at Holthusenkai or Peutehafen. However, even these places will change soon. As the city continues to develop, the mooring spots will be used differently. Hamburg’s new eco-district is to be built on Grasbrook, opposite the Elbtower. And in Peutehafen, for example, a new industrial area is being developed.

This also affects the traffic routes along the River Elbe and a reduction in road traffic is planned. The city of Hamburg, the federal government and Deutsche Bahn are currently examining whether Hamburg needs a new Elbe bridge. Bicycle paths along the riverbank are being expanded and joined together into a sustainable transportation network. Only the Elbe will still flow serenely seaward in a hundred years, connecting city and the lands beyond – as an inspiring and sustainable stream at the foot of the Elbtower. 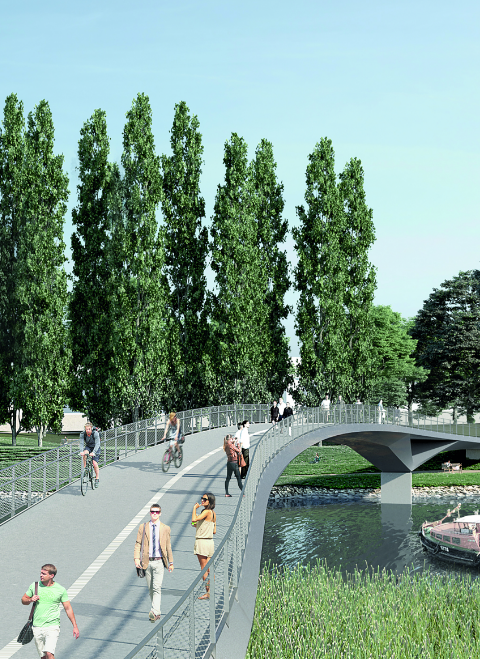 The Elbtower serves an important urban planning function: supported by new bridges, it links HafenCity with Rothenburgsort and joins both districts to Hamburg’s city centre. 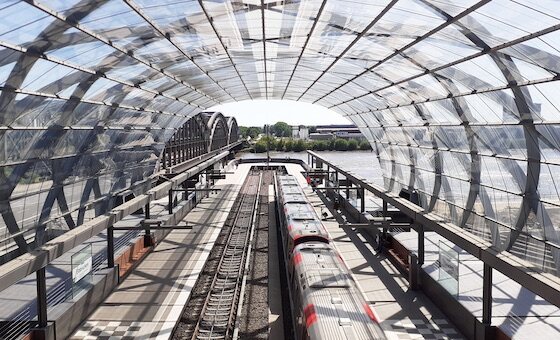 Central location
Where all paths converge

When the Elbtower is completed in three years’ time, thousands of people will come and go every day: The tower will become a hub in Hamburg’s transport system. 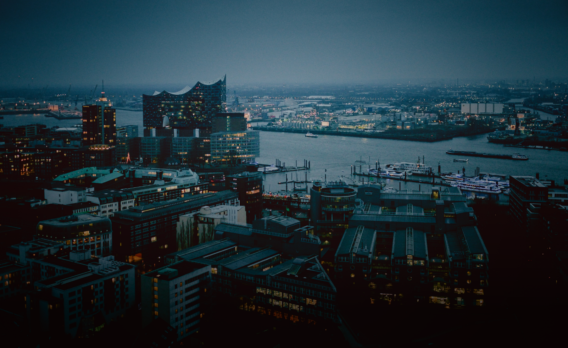 Central location
To the Lighthouse

The water location is an inspiration for people in the Elbtower. Surrounded by water, the building is a driving force for Hamburg’s transformation.