Work on the Elbtower excavation pit enclosure was completed as scheduled mid-May. Walls of reinforced and special concrete were built, some of which extend deep into the ground to protect the excavation pit against groundwater and water from the River Elbe. This means that the excavation pit has moved a decisive step closer to completion. “We will now check the excavation pit for impermeability for several weeks so that the earthworks can soon begin,” says Gerhard Rhein of SIGNA Real Estate.

The construction site for Hamburg’s future landmark is located at the northern tip of the HafenCity peninsula. It is immediately obvious even to non-experts why this construction site is so special: there is water wherever you look. The Norderelbe (Northern Elbe River) flows to the south, while the upper harbour canal’s quay wall borders the terrain to the north. The canal also depends on the tide, which means that the water level is constantly changing.

Therefore, large protective walls need to be erected in the ground to support and seal the excavation pit. The consortium for the excavation pit, which includes the construction companies Züblin Spezialtiefbau, Implenia Spezialtiefbau and Eggers Tiefbau u. Umwelttechnik, have truly created small masterpieces. Since these cut-off walls are so fundamental to the sealing, function and stability of the Elbtower excavation pit, surveyors were brought in from the beginning to monitor the installation and subsequent effectiveness of the walls.

Thick walls that go deep into the ground

A total of more than 28,000 square metres of sealing and diaphragm walls were created vertically, which roughly equals the area of four football pitches. For this, giant slots were fabricated deep down in the earth and then filled with a particularly well-sealing suspension. “These walls were constructed in different variants in order to adapt to the respective requirements,” explains Gerhard Rhein.

Towards the water, the cut-off walls extend up to 55 metres deep into the ground. To the west at Elbbrücken station, the underground and overground railway borders the excavation pit. This means that no direct water inflow is expected there. However, the walls must be particularly stable. They are made of reinforced concrete up to 80 centimetres thick which prevents the construction work affecting the railroad structures.

It is a different situation underneath the excavation pit: there, the groundwater presses upwards. However, there are layers of earth deep below the future building which are impermeable to water. These layers ensure that most of the groundwater continues to flow in the soil instead of rising upwards. Nevertheless, small amounts of water will still rise up through the soil in the future. High-performance pumps, like those in a ship’s hull, continuously redirect this so-called residual inflow. The water is then cleaned in a special plant and fed into the upper harbour canal.

But even after the works on the excavation pit enclosure have been completed, the excavators cannot immediately start digging and excavating soil down to what will be the bottom of the pit. Before that, tests will be carried out to determine whether the excavation pit is really watertight: over a period of one and a half months, it will be closely monitored whether and how much water keeps on flowing in. 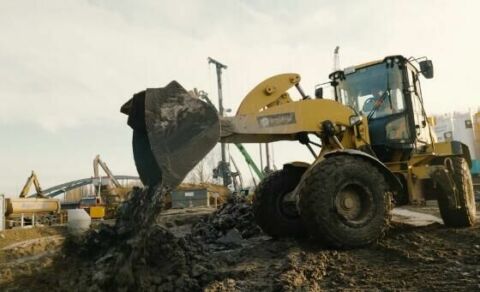